Angelina finally watched the video … and somehow wound up getting mad at JWoww.

The much-hyped video showing Angelina Pivarnick with a mystery man who is definitely not her husband finally made its way to Angelina herself on tonight’s “Jersey Shore: Family Vacation” — but she swears it’s not the bombshell footage the rest of her cast seems to think it is.

Heading into the group trip to the Poconos, Angelina knew the footage — which was sent to Jenni “JWoww” Farley and Mike “The Situation” Sorrentino by someone trying to sell it to the press — existed. Nicole “Snooki” Polizzi let her know that her costars had it in their possession. The question now, however, was when they were going to show it to her. 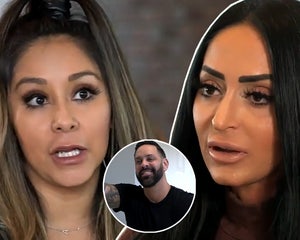 They had planned to do a viewing at the Poconos, but didn’t think Angelina’s husband Chris Larangeira would be joining her because they’d been fighting. When they realized he was coming too, it threw a major wrench in their plan — with Pauly D admitting his being here “complicates everything.”

Following an “awkward as f—” hang out when they all arrived at the resort, Chris and Angelina had a little couples hang with Pauly and his girlfriend Nikki. Though Chris said the were “good,” Angelina clarified that they weren’t “like amazing” but were “working on things.” She also expressed frustration that Chris often takes to social media with their issues, praising Pauly and Nikki for being able to handle any problems they had behind closed doors — and off Instagram.

Eventually, Ronnie Ortiz Magro decided to pull Angelina aside and let her know about the videos away from Chris. He told her they were “bad” and added the rest of the group was only “trying to help” her. He also said he didn’t want her to be blindsided by the footage if it ever hit the public. In a confessional, however, Angelina said she felt like the roommates were only trying to put her and her marriage “on blast.” 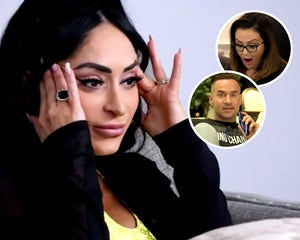 Jersey Shore Recap: Has Angelina Pivarnick Been Cheating on Her Husband?!

Ronnie then pulled Mike aside as well, so he could show Angelina the footage on his phone. “This type of behavior is not the best you,” he told her before pressing play. “I’m just saying. It happens, you’re not perfect, I’m not perfect.”

While viewers didn’t get to see the actual footage, it allegedly showed her “on a tirade,” fighting with a man and threatening to key his car. Her voice could be heard and Angelina didn’t deny it was her in the video at all.

“Of course I’m like screaming, yelling somewhere, I’m Angelina, that’s how I am,” she said. “I remember that. I don’t need to say why that all happened, but all I know is it’s a lot, there’s a lot more than that f—ing video shows.”

She added that she never keyed the car, the man in the video is a friend and she was “going to my friend’s house, that Chris also knows” in the footage. “That’s a friend,” she continued, before saying the woman with the video “is literally stalking my life.”

“Why even send videos like this? It’s ridiculous. What is she gaining out of this?” she asked.

Angelina Reveals Chris Moved Out After Massive Fight, Caught at Hotel with Other Women

Pivarnick then set her sights on Jenni, who got the video first and Angelina felt should have texted her privately to let her know it existed. “She should have, I’m just calling it how it is,” Angelina said to the boys. “She could have told me, straight up, she has my number. She has been texting me. Woman to woman, she could have just never told you.”

Though Mike and Ronnie both defended Jenni for how she tried to handle the situation without having it blow up, Angelina wasn’t hearing it — and said she was “annoyed” Jenni was “hiding” behind her costars. Closing out the conversation, she simply told the boys, “It’s my marriage, me and my husband are working things out and that’s it, we’re trying to work out our marriage.”

It didn’t seem like Angelina had any plan to tell Chris about the video.

As the entire group reconvened, Mike relayed to Jenni that Angelina had “expectations of you calling her woman to woman on the side” when she first got the video. “I told her to call me, she never did,” Jenni simply replied.

In a confessional, JWoww made it clear she wasn’t surprise Angelina was mad at her in this situation — and knew she was back to being “Public Enemy #1.”

The two will hash it out face to face next week, when “Jersey Shore: Family Vacation” airs Thursdays on MTV.