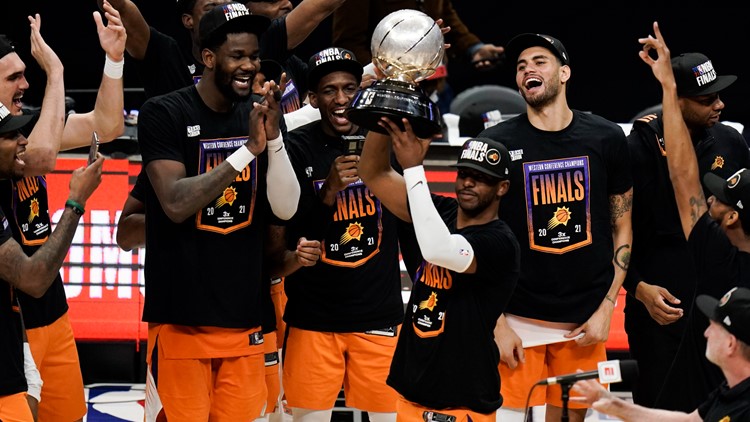 Taking a look at the Suns’ impressive postseason so far as they close out the Clippers in LA. Plus, NCAA athletes can now cash in. That and more on Locked On Today.

PHOENIX — For the first time since 1993, the Phoenix Suns are heading to the NBA Finals after a 130-103 close out of the Clippers in Los Angeles in Game 6 on Wednesday night.

Chris Paul put on an elite performance, scoring 41 points while shooting 7-for-8 from three all while doing it on the floor that he called home for six years of his career.

This is a Suns team that was at the bottom the league for many years. They haven’t made the playoffs since 2010. Phoenix finished fifth in the division for three straight years from 2016-2019 posting a win percentage below .300 each year.

Last season’s 8-0 performance in the Orlando bubble laid the ground work for what Monty Williams and Devin Booker could accomplish here. The offseason addition of Chris Paul put the Suns over the hump and then some.

The Suns won 51 of 72 games this year, had the NBA’s second-best record and have made their way through the Western Conference this postseason.

SUBSCRIBE: The Locked On Today podcast hosted by Peter Bukowski gets you caught up each morning on the biggest stories without taking up your free time. Listen here.


Also on today’s Locked On Today:

As the Suns wait for an opponent, over in the Eastern Conference Finals are two teams that are battling some serious adversity. Giannis Antetokounmpo hyperextended his knee in Game 4 and is now doubtful for Game 5. Meanwhile Trae Young for the Atlanta Hawks missed Game 4 with a foot injury and is questionable for Game 5.

With the injury struggles of the other teams, the Suns are the favorite to win the title. Kleen said with their performance throughout the playoffs, they may be favored anyway.

“The Suns are clearly, when they are at their best as we saw them tonight, they beat a Clippers team that has been the most resilient in these playoffs by 27 on their home floor,” Kleen said. “It’s just hard for me to look at what they’re able to do when they have mustard, a two-way performance led by their star backcourt and not think that whoever they play in the Finals they would have a pretty good shot to win.”

Not only has Chris Paul’s stellar play all year helped lead the Suns to this point but Kleen said he also deserves credit for getting the rest of the team to where they are.

“Not only does Chris Paul deserve some credit for the 41 and 8 tonight, the 37 against Denver to close them out, but he deserves a ton of credit for the breakouts we’ve seen up and down this roster,” Kleen said. “DeAndre Ayton, Devin Booker, Cameron Payne. This team got to where it is not just because of (Paul’s) individual performance, but because what he did for the guys around him.”

The Bucks and Hawks are playing Game 5 on Thursday night as the series is tied 2-2. The winner will take on Chris Paul, Devin Booker and the Suns.

What are we Locked On Today?

🏀Phoenix headed to Finals for 1st time since ’93. @BrendonKleen14 joins @Peter_Bukowski.
💰NCAA athletes can now cash in. w/ @WNS_Brandon.
🏈How will the Giants look different this year? w/ @Patricia_Traina.

SUBSCRIBE: The Locked On Suns podcast is on Apple Podcasts, Spotify and wherever you listen to podcasts.