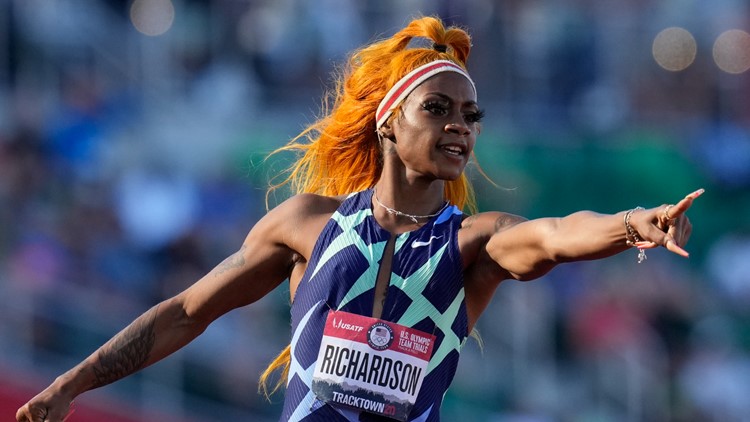 Sha’Carri Richardson won the women’s 100-meters at the Olympic trials, but those results have reportedly been wiped out due to the failed test.

U.S. sprinter Sha’Carri Richardson may miss out on running the 100-meters at the Tokyo Olympics after she reportedly tested positive for marijuana at the U.S. Track and Field Trials, according to multiple reports. She would be the second prominent U.S. track athlete in less than a month to learn she will miss competition due to a failed drug test.

But at least one report indicates the suspension may be short enough to allow the 21-year-old, who easily won the 100-meters at trials, to run a relay event later in Tokyo.

The failed test was first reported by the Jamaican Gleaner, which said it learned from a source that traces of a banned substance were found in a recent drug test sample. Reuters, citing sources, later reported it had confirmed that Richardson had tested positive for marijuana and that her results from last month’s Olympic trials were wiped out. The New York Times also said it confirmed with two sources, adding it was unclear if Richardson would appeal.

Cincinnati Enquirer reporter Tyler Dragon tweeted he had confirmed with a source that the suspension was for marijuana. Richardson faces a 30-day suspension, according to Dragon.

Richardson is expected to be suspended during the 100m at the Olympics but she might get to run on the 4×100 relay.

Requests for comment from USA Track and Field and the U.S. Anti-Doping Agency (USADA) for confirmation were not immediately answered.

The Gleaner and Reuters both report Jenna Prandini, the fourth-place finisher at trials, has been approached about replacing Richardson in the 100-meters. Prandini had already qualified for Tokyo in the 200-meters.

In a cryptic tweet Thursday, Richardson wrote “I am human.”

Richardson blew away the field at trials first in the semis in a wind-aided 10.64 seconds, then again in the final in 10.86.

Let us introduce you to the newest member of the U.S. Olympic Team: Sha’Carri Richardson.@usatf | #TrackFieldTrials21 x #TokyoOlympics pic.twitter.com/O2wvaRgI8X

Last month, American record-holder Shelby Houlihan announced she had received a four-year ban from the sport after testing positive for a prohibited steroid. Houlihan, who holds the U.S. records in the 1,500-meters and 5,000-meters, said she believed it was due to a pork burrito she ate hours before the test. There are many examples in recent years of tainted meat causing positives. Houlihan learned of the ban one week before the trials.

On June 3, runner Kahmari Montgomery accepted a one-month ban after testing positive for THC, according to USADA. The length of the ban, which USADA said was the minimum allowed, prevented her from taking part in the trials.

The Associated Press contributed to this report.