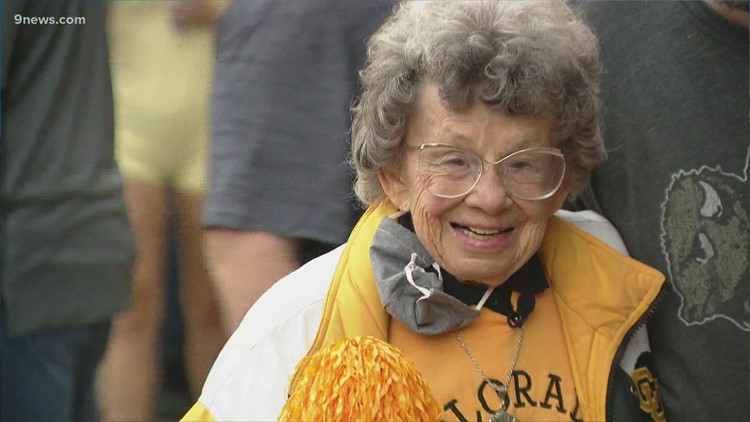 BOULDER, Colo. — Sports fans paid a price with COVID-19. They missed the crowds, the tailgates, the college games — even the high school games.

But no one missed them more than a Colorado Buffaloes superfan in Boulder, Peggy Coppom.

If loss is a companion, it’s one Peggy knows well. She lost her twin sister, best friend and fellow superfan, Betty Hoover, in August 2020.

RELATED: CU superfan, one of two famous twins, dies at 95

“I can’t talk too much because I’ll start to cry, probably,” Peggy said. “Every day I have a little bit of a cry because I miss her and because she’s not here.”

Unable to attend football and basketball games last year due to the pandemic, Peggy cheered on her beloved Buffs from home, alone.

“Of course I miss her. She sat right beside me for years and years and now, see, I’m talking about all this without bursting into tears. I’m getting better,” Peggy said. “I can’t sit around and cry all day. It’s part of life. She would want me to go. I’m not 6 feet under yet. I have a life to live.”

For Peggy, Saturdays are meant for football games. It’s a living tradition that’s lasted more than 80 years, and now she’s back to doing what she loves.

“There’s nothing like being at the stadium with the crowd,” she said. “That’s 100% better than having to sit at home.”

The Buffaloes have been blessed. Just days from turning 97, she’s the matriarch of the Buffs family. Even without her sister, her loyalty is still unmatched.

Peggy is a lesson in living for her children and grandchildren.

“I think she thrives in the need to be out and see people. It’s not for her own good necessarily,” grandson Sean Coppom said. “So it’s not a one-way conversation. It’s about the other person as much as it’s about her.”

Always a twin, always a fan, Peggy knows joy, loss and how to live with both.