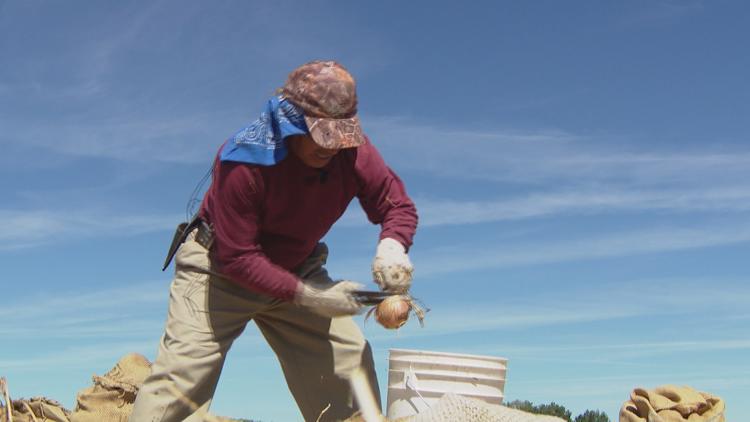 Colorado lawmakers passed a bill this year that sought to end the exploitation of farmworkers in the state.

Senate Bill 87, which Gov. Jared Polis signed into law in June, ensures that the 40,000 farmworkers across Colorado are entitled to things like water, shade, breaks, minimum wage and overtime pay.

The bill also banned use of the short-handled hoe, which has been blamed for long-term chronic pain after years of hunching over in the fields. Farmworkers are also now protected from retaliation from their employers.

“When I first started working on this bill, it became clear that farmworkers unlike almost every worker in the state did not have these most basic rights,” said state Sen. Jessie Danielson (D), one of the bill’s prime sponsors.

Danielson said that most employers in the agriculture industry treat their workers fairly and pay them well, “but just like every other industry, there are those who exploit their workers.”

The reaction to the Senate bill from farmworkers, employers and industry leaders shows that the issue is a complicated one.

Farmworkers:
‘The laws should apply to all people who work in all areas.’


Carmelo spends mostly eight-hour work days picking onions at a farm in the Western Slope town of Olathe. It’s work that doesn’t stop even on the warmest days.

It’s not easy, to say the least, but Carmelo said he’s used to it.

“Estamos acostumbrados a trabajar, y nos gusta trabajar,” he said. “We’re used to working, and we like to work.”


He wasn’t too familiar about the details or changes coming with SB-87. The overtime rule ensures time and a half pay after a certain amount of hours, to be determined by the state. That portion of the bill is still in the rule-making process.

After learning that his employer was worried about costs going up, and not knowing where the extra money would come from, Carmelo said he worried about working fewer hours and getting smaller paychecks.

“The people [here] will say no, it’s better to continue how we are.”

Carmelo and most of his co-workers are migrant workers from Mexico on H-2A visas. They spend months every year away from their home countries and families to work in the agricultural industry in the United States.

“Nosotros trabajadores, mientras más dinero ganamos, es mejor para nosotros,” Carmelo said.  “For us workers, the more money we earn, the better it is for us.”

While recognizing the importance of resting, he said there are days when he and other workers are left with nothing to do at home.

“Estamos todo el día en la casa y no sabemos qué hacer,” he said.
“We spend all day at home, and we don’t know what to do.”

Carmelo said he believes the bill will protect other agriculture workers who are exploited by their employers. He said that’s not the case where he works.


Adolfo Hernandez Atilano loves farm work. He has harvested food for Colorado families for 15 years. But, he said the long hours and minimal pay were not worth it when he could not afford the very same fruits and vegetables he was producing.

“We had to [shop] at other, lower-quality stores.”

The same was true for the clothes and shoes he had to provide for his family of three: “Teniamos que ir a las tiendas de segunda.”

“We had to go to thrift stores.”

During his time in the agriculture industry, Hernandez Atilano said he would work seven days a week. Most of the time from 7 a.m. to midnight or 1 a.m. the next day.

“They didn’t want to give us breaks in the evenings.”

He said he was not making enough money to work only 40 hours a week with days off. To pay his bills, Hernandez Atilano had to work seven days a week.

That’s why he said he supports the changes Senate Bill 87 is bringing to the agricultural industry.

“If this is a country of laws, the laws should apply to all people who work in all areas.”

David Harold employs the workers at the Tuxedo Corn Co. in Olathe. Harold is also a member of the Colorado Fruit and Vegetable Growers Association. The bill as passed is better than it was when it was introduced, he said.

“It still sits poorly with me,” Harold said. “In my opinion, [the bill was] done very rushed and poorly.”

The most financially burdensome portion of the bill is the overtime rule, he said. The bill, as passed, will increase his costs as a producer, he said.

He said he would like to pay his workers more but doesn’t have the money to do so.

He said he thinks that the Senate bill didn’t consider the complexities of the agriculture industry, but he hopes that will change in the rule-making process for overtime provisions.

“None of us are against paying our workers more,” he said. “… We would love to do it, we appreciate them, we can’t do it without them.

“But we’re also feeling the pressure from every angle, whether it’s drought and climate, it’s ‘Don’t use this pesticide or that pesticide’, it’s the consumer says ‘Well, we want it grown this way, we want this, we want that, and we want it inexpensive on the shelf,’ ” he said. “… I’m kind of in the middle, getting beat up from every side, and really not seeing a way out.”

Harold said that he and most agricultural industry leaders were not approached when state legislators were drafting the bill, which Danielson denies.

“From the very beginning, from the concept of the bill, through it’s drafting and passage of the bill, we proactively reached out to ag industry leaders, solicited their feedback and got their input from Day One,” she said.

Now the bill has been signed into law, and Harold said he hopes for more support as he and other industry leaders navigate the changes.

“No matter what the outcome is of this, we as growers need the support of people like the Colorado Department of Ag to help us adjust to and strategize through,” he said.

Lawmakers:
“Farmworkers were some of the only workers in the state of Colorado who were not eligible for overtime protection.”

Danielson said the pushback comes from industry leaders, producers, employers and business owners, but not from farmworkers themselves.

She said she and other legislators involved in the bill worked with the industry every day from before it was introduced to accommodate their concerns.

“Then even beyond that, we’ve set up a robust rule-making process, where they’ve got a seat at the table to voice their concerns,” Danielson said.

She said anyone who claims lawmakers excluded agricultural voices or the industry is “really misleading.”

“For them to claim that they were excluded is false and also, it’s disappointing,” she said.

“We were very, very intentional about reaching our pro-actively to connect with the ag industry, solicit their feedback, get their input in order to make sure we were doing the best job we could for the bill,” she said.

Danielson said that a group of roughly 100 advocacy organizations came together to fight for the kind of change that SB-87 provides.

“We need to remember that prior to the passage of the bill, farmworkers were some of the only workers in the state of Colorado who were not eligible for overtime protection,” she said. “It became clear to me and some of the other proponents of the bill that now is the time to take action and really do something for this kind of justice.”

When asked about the financial impact concerns that employers were voicing, Danielson said, “I believe that it is high time that that industry discontinues the practice of earning on the backs of their laborers in a way that exploits them.”

By sending the overtime portion of the bill to rule making by the Colorado Department of Labor and Employment’s (CDLE) Division of Labor Standards and Statistics, Danielson said they are “building in enough time for businesses to adjust their plans.”


When state Rep. Karen McCormick (D) jumped in to help with Senate Bill 87, she said she was “embarrassed to learn that we had workers in our state and in our country that didn’t have the same protections that [she did] as an employee as well as [her] employees at [her] small business.”

McCormick acknowledged that the exploitation of farmworkers is not a common practice but said SB-87 that sets the bar for fair and just practices in the agricultural industry.

“It’s setting that bar up to where you and I have already been,” she said.

While she knows the changes will not happen instantly, she said she is confident the agricultural industry will adjust and survive.

“This industry is not going to go away,” she said. We’re gonna make sure that it survives. … It’s going to be hard. There’s going to be some penciling work that needs to be done. But it’s time that we did it. We’re 80 years late.”

McCormick said she understands the economics and thin margins that agricultural producers and employers have.