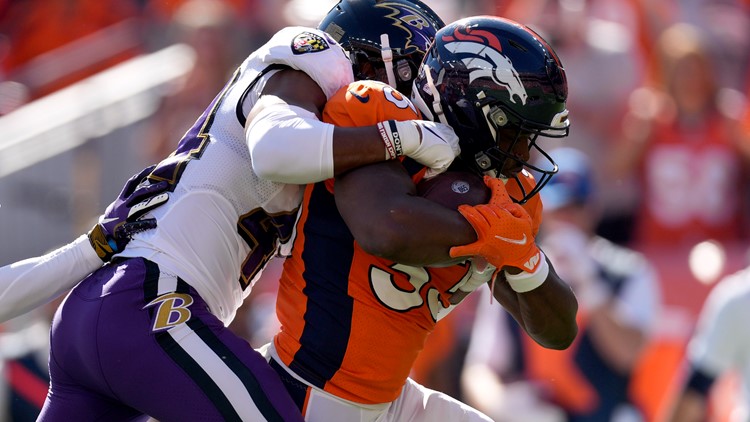 Williams: “When we were winning there was a lot of laughing, joking, loud music playing in the locker room. But now it’s making sure you’re on time for meetings.”

ENGLEWOOD, Colo. — Javonte Williams may be known primarily for his physicality, his ability to break tackles and carry tacklers.

The Broncos’ rookie running back also possesses keen awareness, and not just on the field.

Williams hasn’t been around a professional locker room all that long but enough to notice how the atmosphere changes from when a team starts 3-0 only to fall into a four-game losing streak that needs to be snapped today when the Broncos meet 2-5 Washington at Empower Field at Mile High.

“I can definitely sense it’s a lot more serious,’’ Williams said this week in a sit-down interview with 9NEWS. “When we were winning there was a lot of laughing, joking, loud music playing in the locker room, things like that. But now it’s making sure you’re on time for meetings. Not as much joking, playing around. Everybody knows it’s crunch time. We’ve got to get back to winning.”

It has been suggested that one of the solutions would be giving Williams the ball more. Everyone loves the new guy and Williams has been periodically exciting as the second-round running back from North Carolina has rushed for 4.6 yards per carry overall. So why not give him more than 9.85 carries a game, even if it means veteran starter Melvin Gordon III gets it a little less than his 11.14 carry average?

“I’m just doing whatever the coaches say,’’ Williams said. “Whenever they give me the ball, try to make something happen. However they feel we can win, I’m going to do what I have to do.

“I think it’s helping both of us out. Because we’re not too sore after games. We can stay fresh and healthy. Just learning from each other. Mel, he’s been in the league for a long time. So I’m picking his brain. He went to the Pro Bowl so obviously he’s good. Just little things he’s teaching me, I’m taking it in and putting it into my game and trying to get better.’’

When general manager George Paton traded up to the No. 35 spot in the second round to nab Williams on Day 2 of the NFL Draft, the characteristic most often used to describe the Broncos’ new running threat was “contact balance.” Williams’ running style is reminiscent of Earl Campbell, the great Texas Longhorn and Houston Oiler in the 1970s and 80s. Williams at 5-foot-10, 220 pounds is not as big as the 5-11, 232-pound Campbell.

But tacklers bounce off his thigh pads just the same. Ask Baltimore defensive back Marlon Humphrey, who was carried for 20 yards during Williams’ spectacular, 31-yard run in game 4 this season.

“I feel like most of the defenders don’t really wrap me up. They just hit me and hope I fall down. So I feel like bouncing off,’’ said Williams, who is familiar with Campbell, saying, “A real good one back in the day. He was old school.”

The biggest reason why rookie running backs don’t play more is because is they are usually poor at pass protection. It’s not just the want-to, but the know-how that holds them back. Williams plays as much as he does because he’s better than most rookie running backs at picking up the blitzes.

“Honestly I think it came from me playing linebacker in high school,’’ Williams said. “Early on, getting used to the contact. I feel like a lot of people shy away from contact in pass protection but for me it’s something that comes natural.”

He studies, too. He pointed out to his 9NEWS interviewer that Washington’s front four consists of four, first-round draft picks – Jonathan Allen (2017), Daron Payne (2018), Montez Sweat (2019) and Chase Young (2020). Yet after ranking No. 2 in total defense and No. 4 in scoring defense last year, Washington is 29th and 32nd in those categories this year, essentially allowing 100 more yards and 10 more points per game.

“They’ve got an awful lot of talent,’’ Williams said. “It’ll be a tough match-up for us but I feel like we should be pretty good as long as we do what we’ve got to do.’’

It would seem the biggest difference between the 3-0 Broncos and 0-4 team since has been strength of opponent. Cupcakes early, contenders lately. Only the Broncos can’t do anything about their schedule so they’ve directed all focus on how they play, not who they play.

“I think we got away from the basics and fundamentals,’’ Williams said. “I feel like when we won those three games we kind of like started chillin’. Obviously we had people get hurt along the way but we can’t use that as an excuse. I feel like we’ve got to go back to the small things, catching the ball, not getting penalties, things like that. I feel like we’ve really been beating ourselves. It’s not really too much about the other team.”

The return of receiver Jerry Jeudy and tight end Albert Okwuegbunam will give Broncos quarterback Teddy Bridgewater more options in the passing game, particularly on third down. And if the Broncos can keep drives alive, their should be more carries for both Williams and Gordon.

“Albert is a great player like you said,’’ Williams said. “He can also block in the run game. And Jeudy, when I was in college he was one of my favorite players to watch so having him come back and the way he’s been practicing, the way he’s been running the routes, I can tell when he comes back he’s going to be a spark for the team.”

This is a rookie who knows.

RELATED: Washington game could determine whether Broncos are buyers or sellers in trade market